Seiya began his training in Greece, and with the training of his master Marin and his own hard work, he was acknowledged as the Pegasus Saint by the Pegasus Cloth. After having mastered the use of Cosmo, he mastered Pegasus Meteor Fist and gained the strength to break the stars. 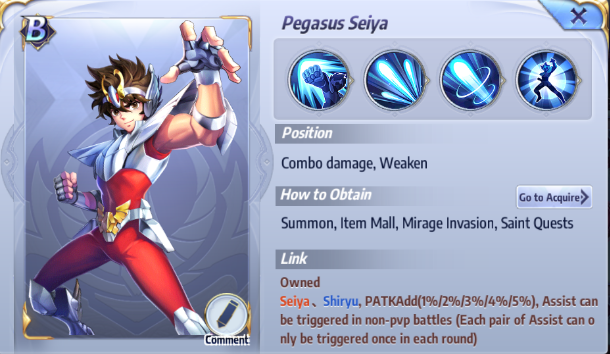 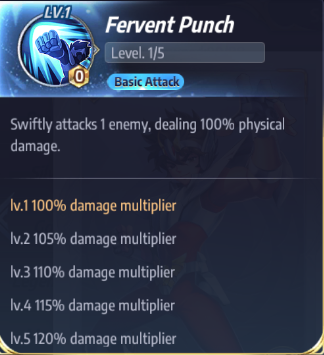 When Seiya is above 50% HP, his P.DMG is increased by 5% (7%/10%/12%/15%) and this effect cannot be dispelled. When at less than 50% HP, his skills are empowered (Pegasus Meteor Fist attacks one extra time, and Pegasus Comet Fist’s weakening effect is increased by another 60%) 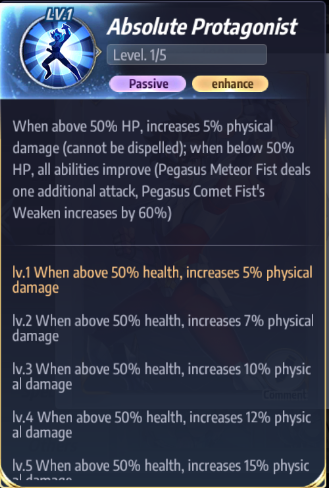 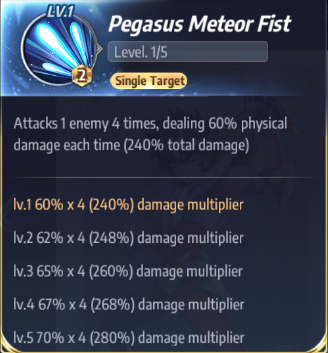 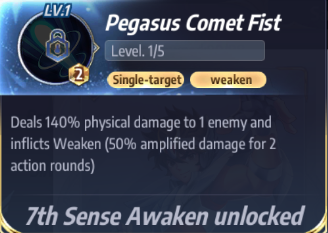 Seiya is a single-target damage dealer with high damage. The 280% P.ATK damage of Meteor Fist and the damage buff from his passive makes him a real beast. Comet Fist's debuff greatly increases the damage of his teammates and makes him viable for many lineups. Seiya is a B-class Saint, which makes it very easy to obtain him and level up his skills. He is probably as good as most A-class Saints, which is great. His ability surpasses that of his given rating.

Seiya truly shines for PvE boss encounters where much single-target damage is needed. However, in the Galactic Arena, Seiya very seldom gets a chance to use his burst damage as both teams usually compete with SPD and control. So for PvP, it is better to build Seiya with high HP, survivability and SPD, making him act quicker. Therefore, debuff the enemy and then alternate between using Comet Fist and Meteor Fist for some decent damage.

Fire Drop and Staunch greatly increases his damage. Tenacity helps him soak more damage. The reason for choosing HP rather than P.DEF is because of his passive skill. If Seiya has high max HP, you don't need to worry about him being one-shotted even when he has less than 50% HP.

The P.DEF and C.DEF provided by Silver Dragon makes up for Seiya’s shortcomings, and his Pegasus Meteor Fist makes Silver Dragon very potent in his hands.

2.     Kingfisher: Crits have a 70% chance to deal true damage. Damage dealt is equal to attack or crit damage, whichever is highest.

Silver Dragon is dependent on the enemy’s Max HP, which makes its damage more difficult to predict. On the contrary, Kingfisher’s 50% chance to trigger is much higher, and the crit requirements go hand-in-hand with Staunch. Its true damage is equal to attack or crit damage, whichever is highest, which gives it rather predictable damage.

And that’s a few thoughts regarding damage. You can always try to overwhelm the opponent. If Seiya has a big HP pool, then he’ll be more difficult to focus down. He can also rely on his passive buff to dish out high damage.

A lineup with Seiya at its core should be aimed at keeping him alive. Couple him with Dragon Shiryu or Cassios for protection; Andromeda Shun for P.DEF and control; Eagle Marin and Chameleon June to link everyone together and heal, thereby ensuring everyone’s survival and keeping overkilling to a minimum. Opinions differ as to the last position, so it depends on what you believe your lineup is missing. If you lack SPD, then use Ophiuchus Shaina to buff that. If you lack control, then use Lizard Misty to taunt and reflect damage. If you need more energy use Kiki. These are but some of the viable choices. 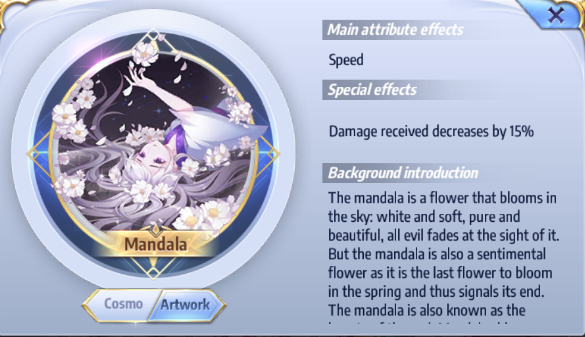 It grants SPD and reduces damage taken which helps him remain in the battle and take his turns quicker.

Seiya as a Support should act quickly and debuff the enemy, thereby increasing the damage of your other damage dealers to ensure swift kills. Recommended single-target damage dealers: Scorpio Milo, Crane Yuzuriha or Sagitta Ptolemy.

When you are facing Seiya, you should first check the enemy’s lineup and make sure whether he's acting as a damage dealer or support. Seiya as a damage dealer usually has a big HP pool but rather poor P.DEF. You can try to kill him in one round, but if you fail, his passive might make the enemy team kill you instead. Thus, it is generally preferred to control him.

Seiya as a support has rather low damage output, so focus on the enemy’s damage dealers instead. But if you ignore him completely you just might end up dead. So, it might still be best to control him, and focus him down in the later stages.