Conditions for opening: When the player's level reaches level 38, the Saint who has awakened the 7th sense and reached level 60 can open the eighth sense. 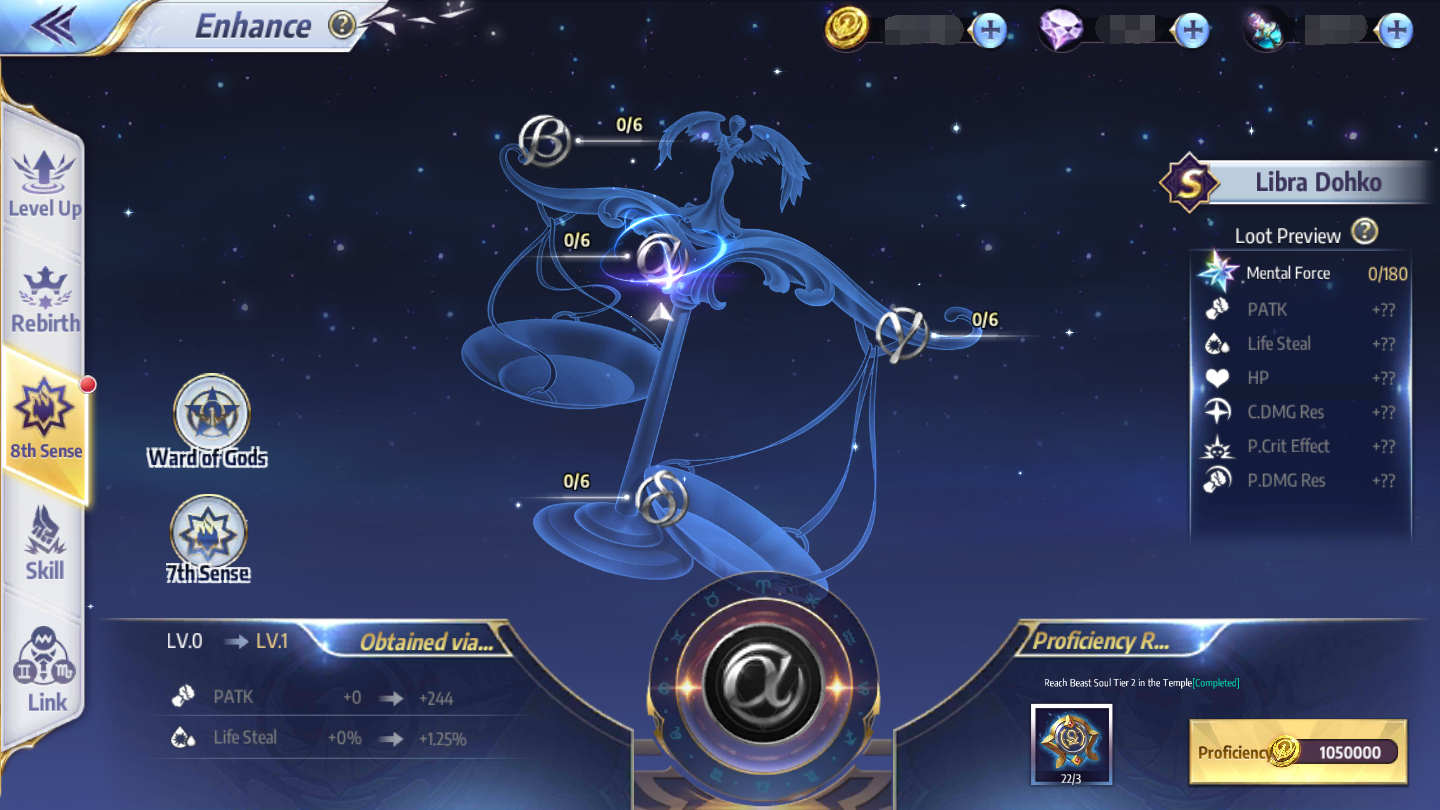 β: HP + Status or DMG resistance, the Proficiency Requirement is the Saint has at least 2 skills to level 2; 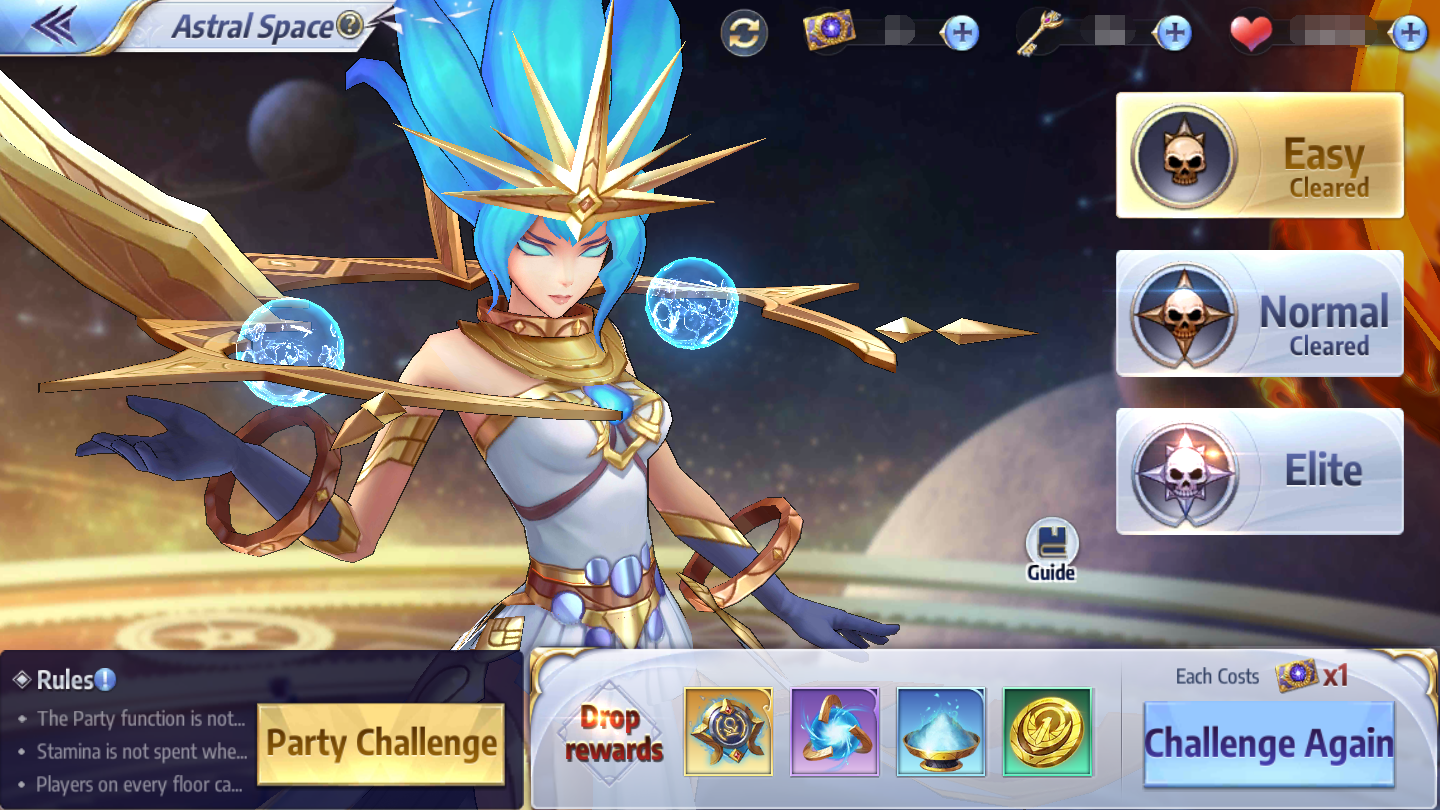 Players need to choose 18 Saints to enter the enchantment and challenge 3 difficult battles, (Saints who defeated boss will not be allowed to continue the following battles). Only after all the 3 battle are cleared can the next difficulty. Party Challenge can be started after Easy difficulty cleared (the difficulty in party challenge is the average difficulty of the team and it will be easier than solo challenge, so that players can easily collect materials.) 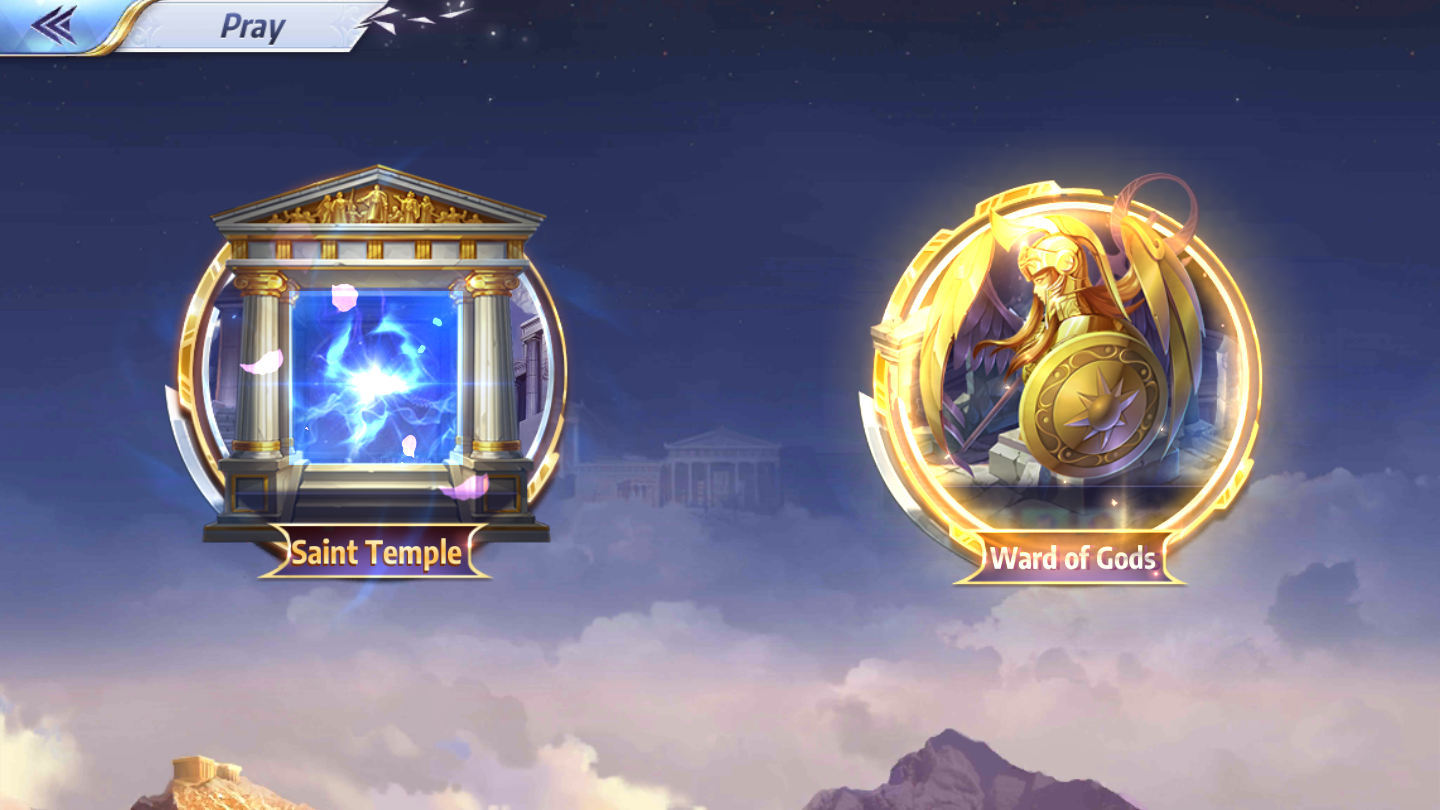 Players can select and load up one Ward of the Gods skill in the Lineup or Preparation Menus and use it in battles. 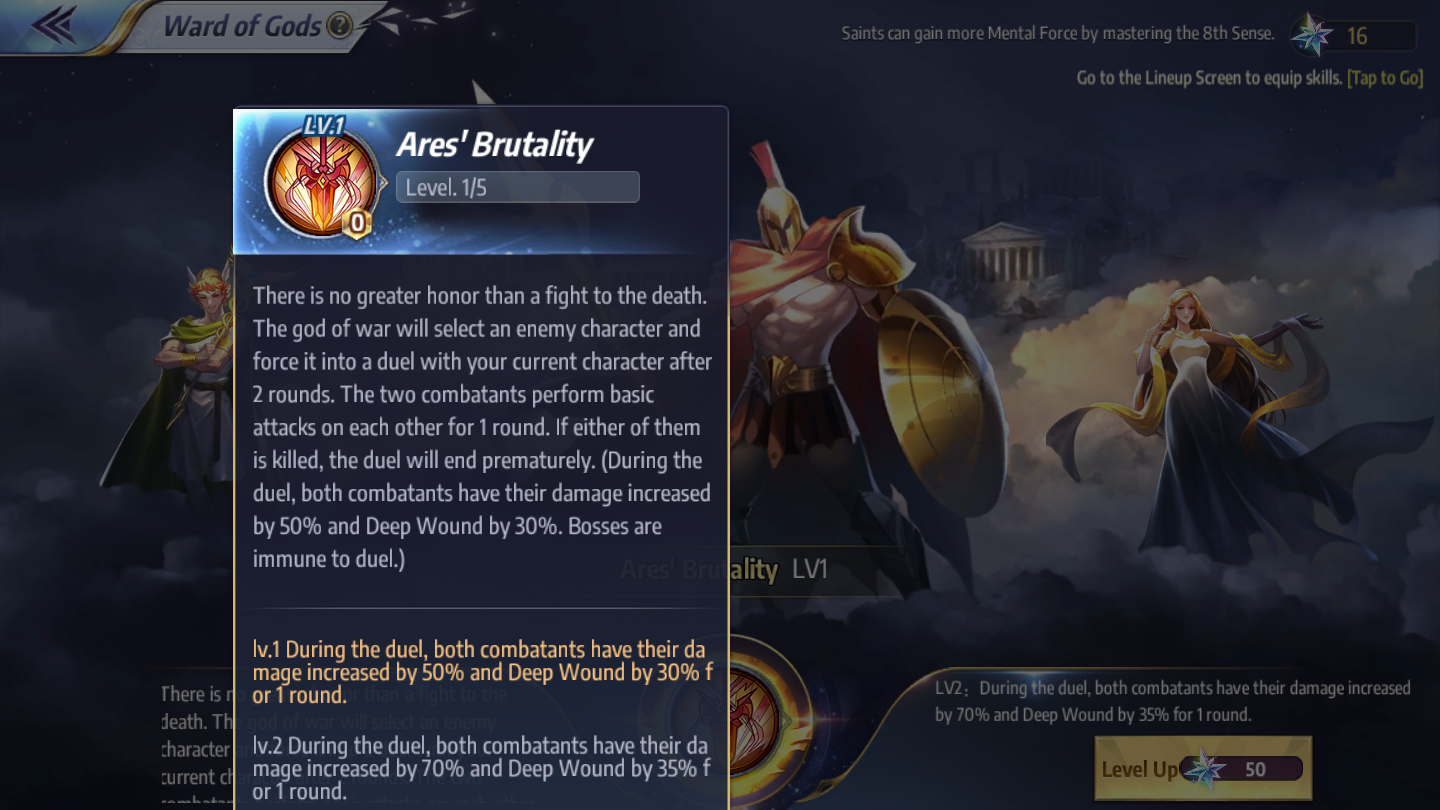 Selecting an enemy and force the enemy into a duel with your current Saint by basic attacks. It is suitable for Saints with strong basic attack or special effects to restrict the core enemy Saints. 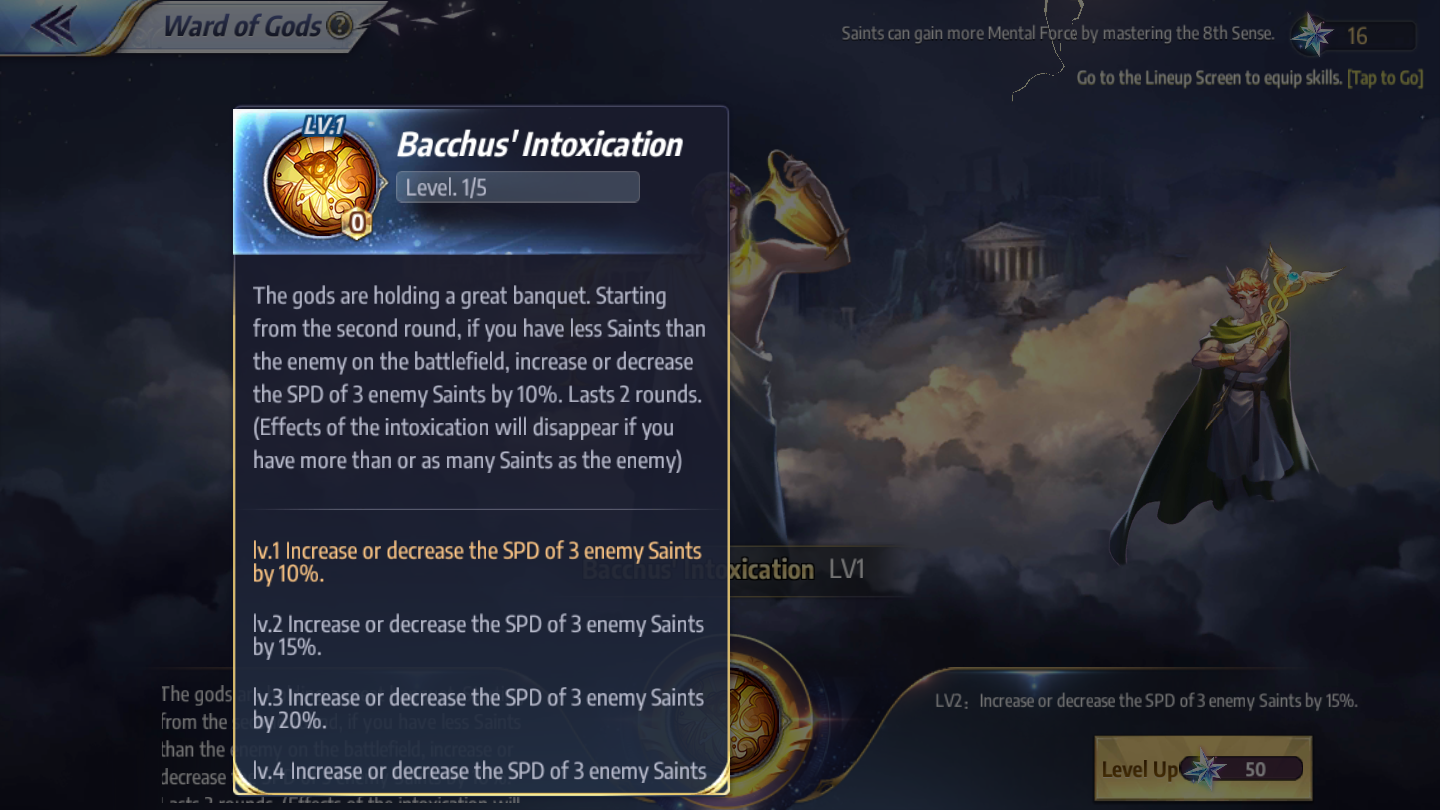 If you have less Saints than the enemy on the battle field, the speed of 3 enemy Saints will increase or decrease by 10% ( lv.5 30% ), lasts 2 rounds.

When the enemy has high speed, this skill can reverse your speed inferiority to the counter attack. It is suitable for the team without speed advantage. It’s suitable for both PvP and PvE. 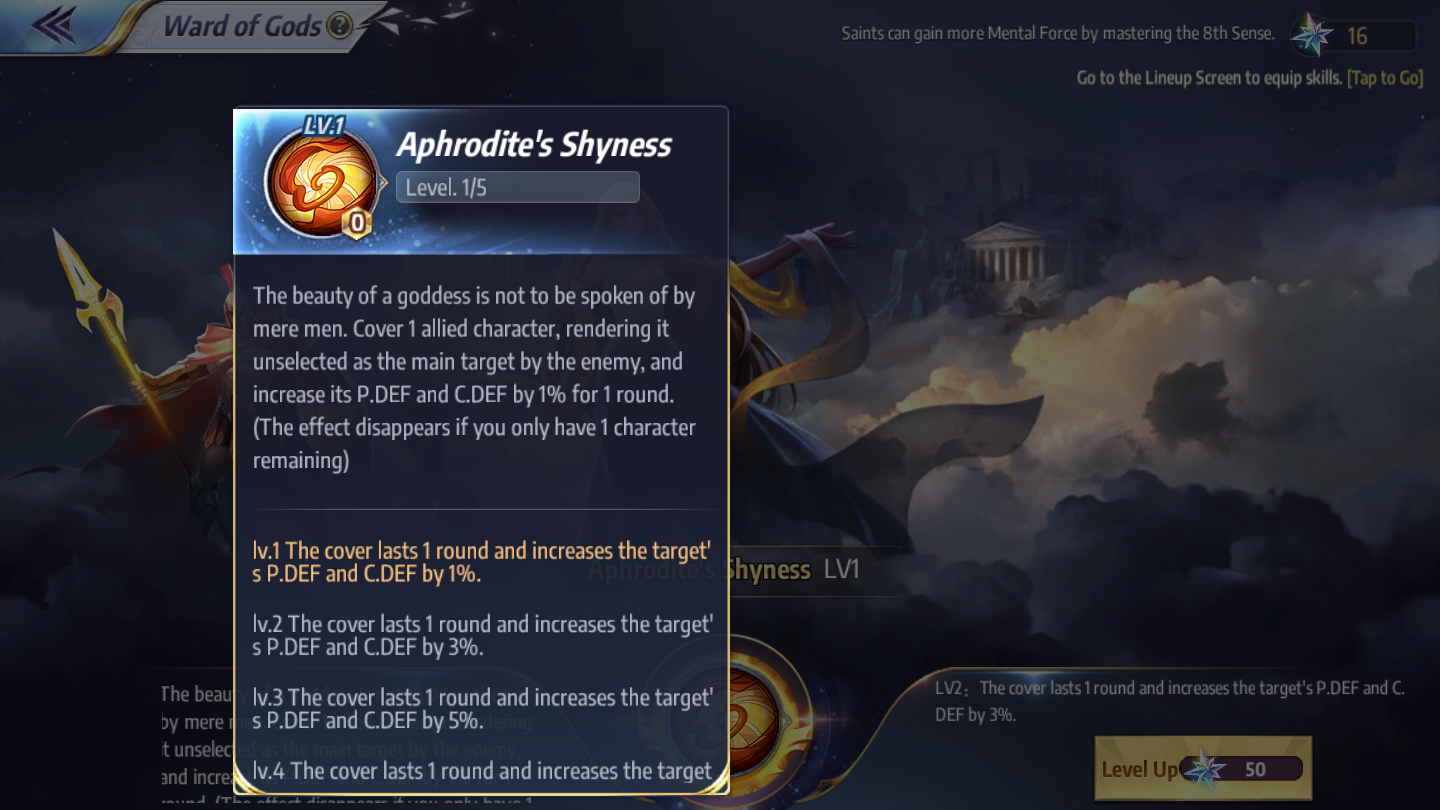 This is a protective skill, which can cover 1 Saint rendering it unselected as the main target by the enemy, and increase the P.DEF and C.DEF by 1% (15% for lv.5), lasting for one round (2 rounds for lv.5)

This skill can give 1 Saint a short-term protection when it in crisis, and is very suitable for protecting the core DPS from being defeated. In a single DPS line-up (for example, the core DPS is Sagittarius Aiolos), this skill can make him continue to attack for one round, which can reverse the battle. 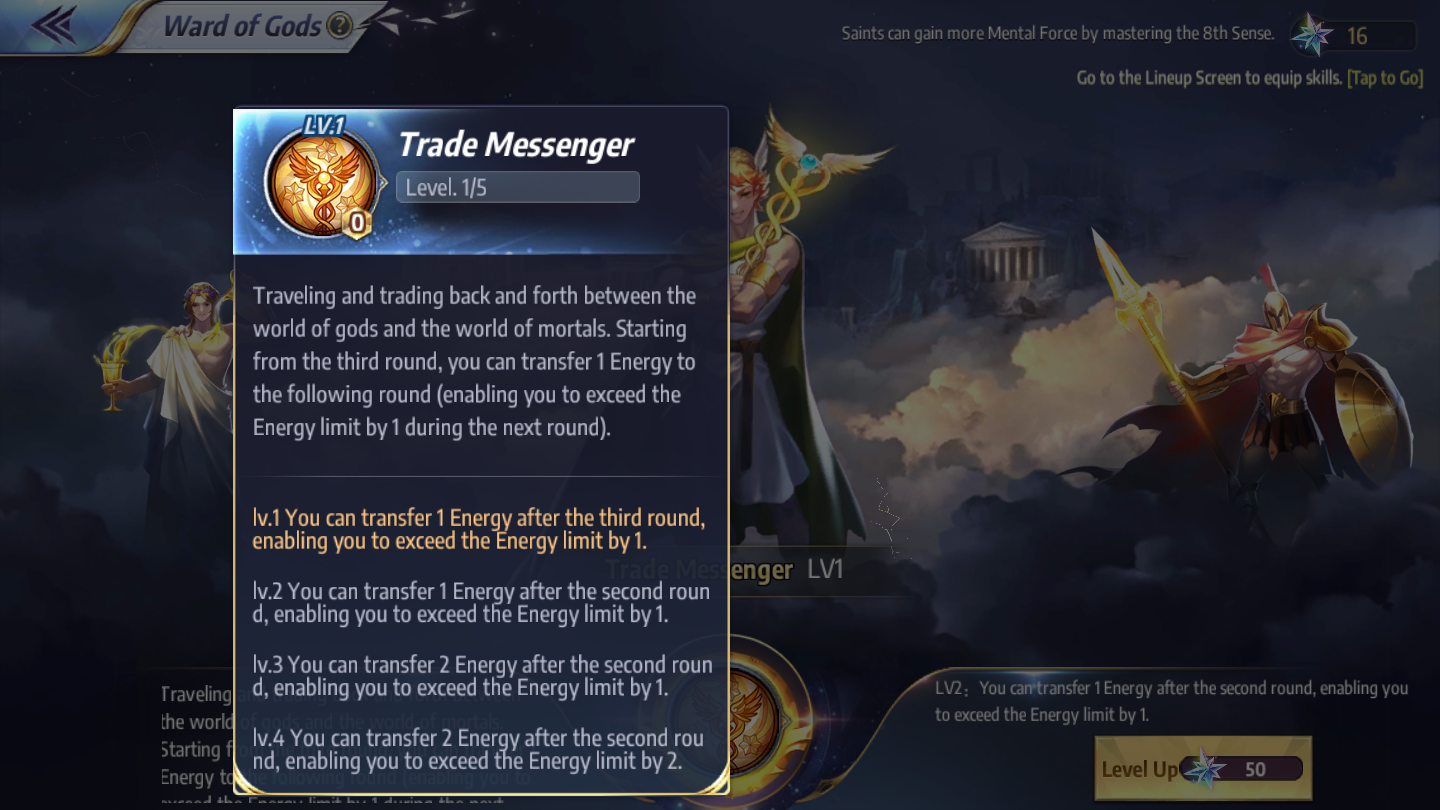 Starting from the third round, you can transfer 1 energy point to the following round (3 points for lv.5)

This skill applies to the C.ATK team (core DPS: Sea Dragon Kanon) and P.ATK team (core DPS: Pisces Aphrodite) which starts to burst out from second and third rounds. It can increase a large amount of DPS damage in the battle of the Legion Boss and Legion Dungeon.